Well I assume that most of our old timers have long since finished checking in here on a regular basis but in case you have stopped by, get ready for news coming soon. 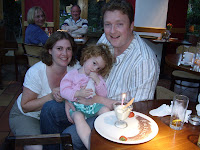 Yes I know that was two days ago! What kind of parent am I? Actually I think it's a great indicator of where we are that this third birthday is not quite the sigh of relief milestone that the last or certainly the first was. It's nice that we celebrate it for what it is rather than what might have been. Anyway there's lots of great pics to upload when I get more than 2 minutes to do it so in the meantime here's a shot from Pizza Express in Alresford for Amy's birthday tea on Monday where she attracted the usual attention from all and sundry. The staff brought her some complimentary ice cream complete with candle and kindly sang Happy Birthday, after which the whole restaurant erupted in applause led by the couple behind in the picture who would have happily taken Amy home with them. 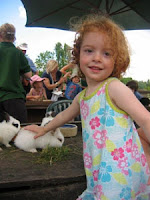 Here's a picture of Amelia making friends with a bunny down at Birdworld the other day. We're on stand by for a jelly and ice cream extravaganza as we have a party on Saturday for Amelia's upcoming 3rd birthday (oh yes it's true). There's a bouncy castle, trampoline, sandpit and all the usuals. Full report to follow.

Generally she's coming along just fine and is getting ready to start at playgroup in September. She's finished her first swimming lessons and can paddle around quite well with the aid of a noodle. She's talking non-stop and has even managed to pick up some of her old Dad's trademark phrases, 'You know you want too', 'Cheers Mate' and the ever popular 'Jesus Christ!'. Well it was bound to happen I suppose. We just smile politely and vow to curb our exclamations from here on. 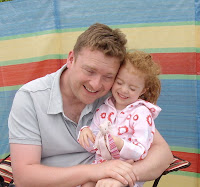 Well what can I say? What excuse can I give for such deriliction of duty in not posting here for almost 9 weeks? Well those of you unfortunate to ask me what's been going on over the last 6 months will have been bored to the point of suicide with the 'other website' project. Well that's all up and running now so I have more time to do this.

We've been on holiday! Yes we visited the lovely Praa Sands in Cornwall and learned the true meaning of rain. However I did try my hand at body-boarding and we managed to spend a full day on the beach as you can see. There's so much news I don't know where to start so I'll return later with more. Have fun. Nice to be back! 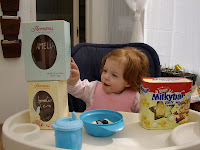 Well apologies to those who have had problems returning to the blog having clicked on an image to enlarge. It looks like the clowns at Blogger have managed to take a perfectly good piece of software and ruin it. No change there then. Anyhow we get the bairn back from her brief holiday tonight which is nice. On Saturday morning we'll have an Easter Egg hunt followed by some serious chocolate munching. Here's a pic from last year's haul to get you in the mood. Have a good Easter!

Well it looks like they fixed the problem with the pictures so we're back full steam ahead with more posts as promised. Here are the girls enjoying breakfast in bed on Mother's Day the other week. Amelia was very excited to be helping and we made a jolly old mess in the kitchen but at least Anna got a bit of a lie-in plus the perks. Of course Amy had to have her own as well to ensure pilfering didn't occur and I think on balance it went rather well.

News-wise there's not much to report apart from Amy talking 10 to the dozen as usual. She's off to stay with Grandma & Godma this week from Monday to Thursday night so oh my Lord are we going to kick back! Cinema, curry, boozing, the lot. Actually it's more likely we'll just clean the flippin' house & then crash. What with all my extra-curricular activities at the moment any quiet time is gold to be honest. 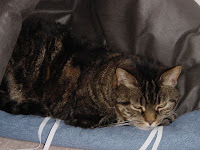 We did have a scare with Lucy-Cat (official name), our family feline last Thursday. On noticing how thin she was, Anna dragged her off to the vet to be told there was a large lump in her abdomen which felt fairly, well terminal. She gave Lucy a pre-emptive painkiller and told us to give them a call when we felt 'the time' had come. So I stocked up on fresh chicken, pilchards, tuna, all the stuff she's not usually allowed, on the basis that if she's going to check out, she'll do it on a full stomach and being fussed over.

Well as usual the cat doesn't seem to have read the script. She's eating 3-4 times a day, putting on weight and generally giving the impression of an animal getting on with it as opposed to rolling over. Not sure what the next stage is going to be but at the moment we're just enjoying the extra time. In the meantime we have had many discussions abou Heaven etc and that Lucy is going to be going there soon. We'll see.

Well some bright spark has decided to created an upgraded Blogger ( the host for this blog) and what a surprise, it doesn't work properly. For now there'll only be text posts without images. Let's hope someone sorts it out soon. 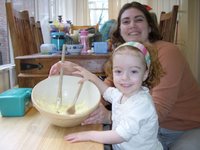 I almost can't believe it's here already but we had to submit Amelia for pre-school in September and she's been given a place. It's ridiculous to think she'll be 3 years old then and before you know it we'll be picking out the school uniform. I'm filling up at the mere thought.

It's a fair trek to the pre-school though. As of course we live in Camberwick Green where I work from home, Anna walks 100 yards to work and Amy's childminder is only a 10 minute walk, it's only fitting that we should have the huge task of lifting Amy over the fence each morning as the '3-4-5' club is held next door at the Methodist church!

Anyhow we're all looking forward to the weekend as the temperature is slowly climbing back up ready for spring - yes folks it's just round the corner. Incidentally we had a huge spike in our user stats for Tuesday and Wednesday this week and I was a little confused until I remembered we carried the bulletin on little Amillia Taylor the other day. Looks like we must get Googled fairly regularly as dozens of people looking for that story found their way here - lucky them! 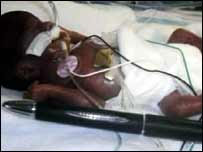 You'll probably see this on the news but I was interested to see the report on Amillia Taylor in Miami who went home yesterday after 4 months in hospital and is believed to be the first baby to have survived following a gestation period of less than 23 weeks. This is a world record apparently, a dubious honour to be sure.

She was the size of a pen and weighed 10 ounces (284g) at birth making our Amelia look like a whopper! Amillia has experienced respiratory problems, a very mild brain haemorrhage and some digestive problems, but doctors now say her "prognosis is excellent". Apparently Amillia is latin for 'resilient', something we didn't know but can certainly testify to. Happy trails Amillia! 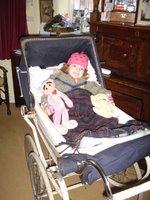 As for our own little 'cheekius maximus', she like us has been down with the dreaded lurgy for a few days and has coughed herself into oblivion bless her heart. She seems to be over the worst now but we're both suffering so it's a bit like quarantinesville here. Still, at least it's not bird flu. 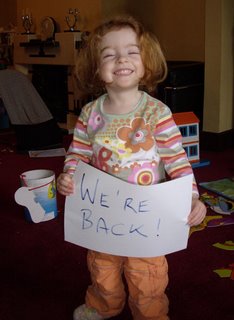 After my slightly over-emotional farewell (see last post) I spent the subsequent days feeling somewhat edgy and this developed into what I can only describe as mild anxiety. Then it hit me. This blog long ago transcended from being merely a diary of how Amy was getting on, it served two other very important purposes. Firstly it overcomes the irregularity with which we all contact each other to see how things are going. I've realised that when I meet up with people after days, weeks, months etc., they're completely up to speed with what's going on. Great! Secondly it acts as what I've discovered now is a very necessary outlet for me. I can splurge endlessly about all sorts of nonsense and should you have the misfortune to stumble across AFC during your lunch hour or whatever, you've got to read it. That gives me some kind of warped satisfaction.

To be honest I really felt a sense of loss after calling time on this thing. I mean it's been two and a half years and you kind of get used to it you know. I also know some of you were sad to see it go too. Let's face it, it fills 5 minutes every now and then doesn't it? So with a focus primarily still on the little lady, but with my general ramblings too, we will march onwards to a now undetermined future.

Amy's Fan Club is back, and it's here to stay.

Incredibly Amy's Fan Club has been viewed by visitors from the following 77 countries:

Welcome to all of you and thanks for your support.